This section allows you to view all posts made by this member. Note that you can only see posts made in areas you currently have access to.

BTC Miami Conference
Crown attended the North American Bitcoin Conference last week. It was the largest conference in North America with nearly 5000 attendees. It was attended by Fabian Olesen (chaositec), Artem Brazhnikov (artem), and Joe Connors (snoops) of the core team, as well as Jerry Ruiz, Andres Jeanton, and Mike Schleifer of Crown LATAM. The team made countless connections with people throughout the industry that we expect will propel the project that we are in contact with. A detailed report of the conference will be available in the coming days. Pictures and media from the conference have already been posted, and more is on the way! Below are a few galleries from the event. 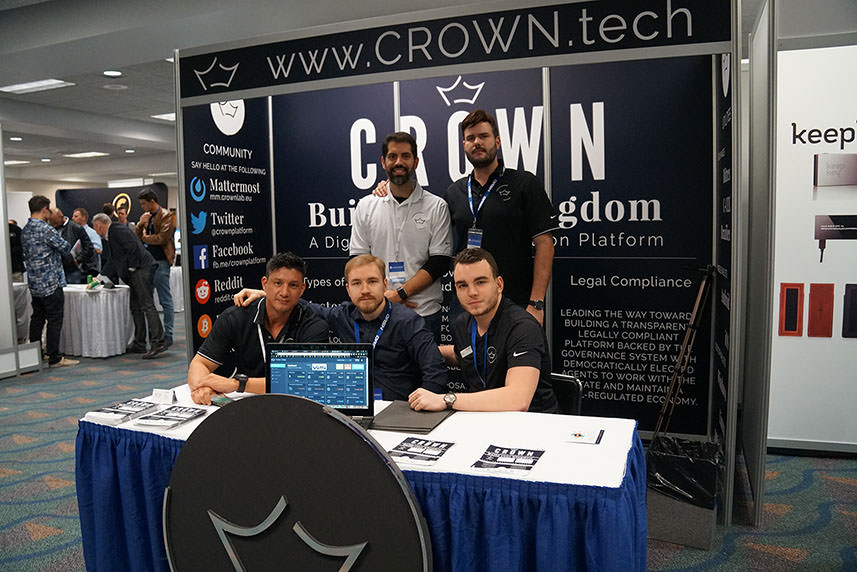 Innorthvation Santander Conference
Crown also attended the Innorthvation Conference held in Santander which was the first Blockchain Conference in Northern Spain. It was attended by Victor Martin (vic) and Luke Bettles (calnaughtonjnr).  There were 30 minutes to present Crown and discuss its main features. Several connections were made with prominent individuals that we are looking to work with.

Crown at Ruhr University
The Ruhr-Universtität Bochum News Portal has published an article discussing the lecture led by Ivan Labra (ilabra) and Roderic (Twister) at the Institute for Media Studies on January 15th. Students from the course Blockchain-Technology: From the Internet of Information Towards the Internet of Value submitted a proposal to the Crown governance system to fund the event. The course is imparted by Jose Herranz; a blockchain researcher at the Institute for Media Studies.
Read the full article here: http://news.rub.de/studium/2018-01-18-digitales-geld-blockchain-experten-besuchen-bochum

Crown Vlog and Blog
The new vlog series and blog on Medium will begin this week, but updates will continue to be posted here as well. We have calculated that Wednesdays will be the best release day for our new process. Keep an eye out for the launch!

Bitcore Implementation
Bitcore implementation is almost finished which will allow our community to use Trezor to store CRW. We are thrilled to offer this to our community so that we can all store our favorite token using the best security available.

Braziliex Exchange
The owner of Braziliex met with us in Miami and is a huge fan of the project. Braziliex is the fastest growing exchange in Brazil and wants to work with us to make Crown the biggest altcoin in Brazil. We will continue to work with him directly. Plans are being made for conferences, sponsorships and events in Brazil.

Crown Contests and Giveaways
We will have a new contest starting this week and many more in the weeks to come. Watch our Twitter for details!

Next Release
The next release will be available within a month. This release will simplify masternode and systemnode creation, allow for updates directly from the wallet, decrease the time to first systemnode/masternode reward and fix various bugs.

Ruhr University Lecture and Discussion
A lecture and discussion on the Crown Platform were held at Ruhr University in Germany. It was led by Ivan Labra (ilabra) and Roderic (twister). Pictures from the event will be available soon as well as an article by the university! We hope to continue spreading Crown and the discussion of our platform to the best and brightest in universities across the world.

BTC Miami Conference
This week we will be attending the BTC Miami Conference on January 18th and 19th. We hope to use this stage to build on our connections in North America. Keep an eye out on twitter for pictures and updates from the event!

Crown Vlog and Blog
A dedicated blog for Crown Announcements and news is being built on Medium. The vlogs will be hosted on our Crown Youtube page. The blogs and youtube videos will cover similar material, so whichever medium you prefer will be up to you! These will begin next week after the btcmiami event. These will most likely be posted on Tuesdays after the workflow is settled.

Crown Wallet Updater
Work is being done to allow Crown wallet updates directly from the wallet! Here is a sneak peek for what to expect: https://www.youtube.com/watch?v=R2HGvRonDmk

Braziliex Exchange Listing
We are now listed on Braziliex! We hope to establish Crown as a favorite in Brazil as crypto continues to grow. This was a strategic long-term move. We expect this exchange to become a major player as the market continues to expand.

Crownfunding
This week we asked the community to contribute CRW and BTC towards an unspecified goal in the amount of $100k. We understand that this ask was offputting to some because we did not disclose what these contributions were for. We completely understand this sentiment, but we felt that in this instance it was necessary to reach our shared goals with the community. We can't thank the community enough for the support we've had in this initiative raising over 150% of the goal in just three days. We will be thrilled to reveal what this has all been about as soon as we can.

Crown Systemnode Holiday Giveaway Contest
The Systemnode giveaway concluded on January 5th and our winner was @edirico on Twitter who will receive a Systemnode as well as 12 months of hosting courtesy of Node-Vps.com. We will have many more giveaways coming soon due to the success of this contest.

New Website
Work on the new Crown website has begun. The release is set for March. Our goal is to maintain the heart of the values that Crown has represented while improving the information, communication and professionalism of the website.